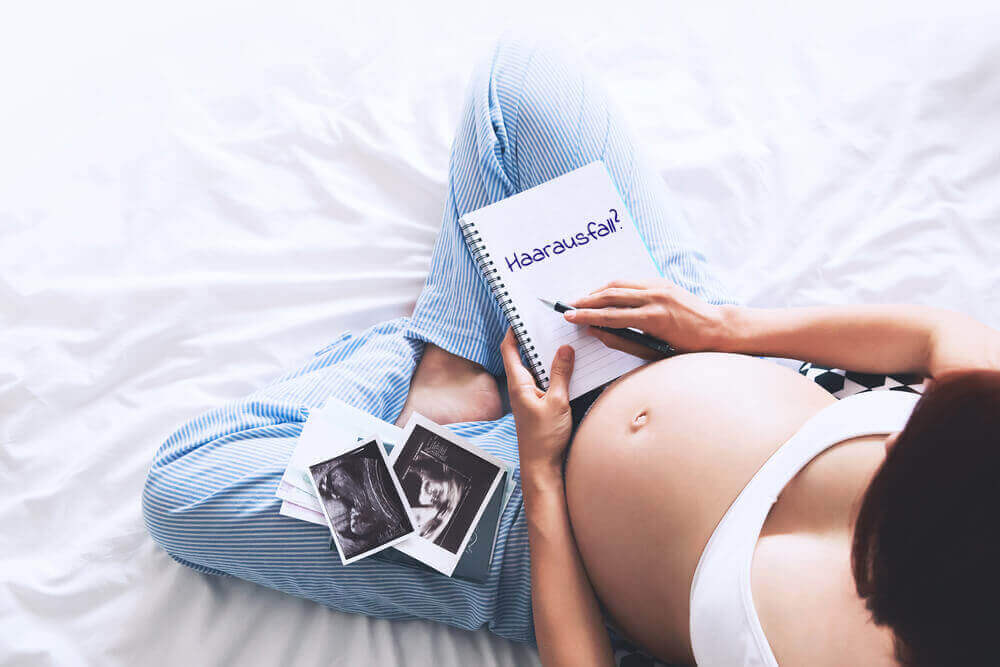 During pregnancy, many women have unusually thick hair, excellent skin and positively radiate from within. Female hormones ensure that the hair grows better, stronger and longer than ever before. What causes this? During pregnancy, the body’s hormonal balance changes and the estrogen level increases greatly. This can mean that the hair's growth cycle is somewhat altered. In fact, during these nine months, there are more hairs in the growth phase and thus fewer hairs that fall out. This can lead to thicker hair that looks particularly healthy and strong.

However, there is a big difference between hormone levels during and after pregnancy.1 As has been described above, pregnant women have less hair loss and thicker hair than normal. This can be due to the increased estrogen level during pregnancy, which means that more hairs than normal are in the active growth phase. After childbirth, the estrogen level falls rapidly. The hormones return quickly to their normal level. As a result of the changes in hormones acting on the hair roots, more hairs than normal can suddenly go into the resting phase. In this phase, the affected hairs gradually detach from the anchoring in the scalp and ultimately fall out. As the hairs spend a period of time in the resting phase before falling out, the hair loss starts at around two to five months after the birth of the child.2 This is particularly noticeable because the affected hair loss is evenly distributed across the whole head (diffuse hair loss).3

Many women are alarmed the first time that they experience this, but the phenomenon is widespread and is caused by the large variations in hormone levels.

Hair loss after pregnancy normally lasts around three to six months, but may in rare cases last longer. After this period, the hair grows back to its normal length within six to nine months. However, sometimes hair grows back more slowly or less thick than usual.4

Stress after pregnancy and while breastfeeding

The period after pregnancy is frequently associated with many challenges, stress and little sleep. This deprives the body of energy and valuable nutrients that are extremely important for healthy hair growth. The body needs a lot of energy to deal with the numerous challenges after childbirth, but the body's own energy reserves are limited. It is therefore possible that insufficient energy reaches the hair roots because the energy is needed more urgently in other parts of the body.

Since active growth in hair roots has extremely high energy requirements, it is possible that the hair roots do not receive sufficient energy, causing hair growth to suffer.

Aside from hair loss after pregnancy, there are also other causes. Learn more here:

A quick and simple explanation

We protect your data!

Plantur 21 and hair loss after pregnancy

Continuous use of Plantur 21 after childbirth will additionally support hair growth and ensure a sufficient supply of energy to the scalp.

Plantur 21 contains an activating nutri-caffeine complex that provides energy at the hair roots. Plantur 21 Nutri-Caffeine supports the energy supply. Valuable micronutrients such as zinc, biotin and magnesium also ensure strong and healthy hair growth. This recharges the energy reserves of the hair roots and you have one less thing to worry about after pregnancy.

Too much stress with your newborn to allow you to wash your hair daily? No problem. Plantur 21 Nutri-Caffeine Elixir ensures the daily caffeine supply to your hair roots even on days when you do not wash your hair. It is applied by parting the hair and then massaging into the scalp. The elixir does not need to be rinsed out. The hair can be styled as usual.

During pregnancy, hairs stay in the growth phase longer. This also means that they stay on the head longer and may dry out. A hair treatment or hair conditioner will provide the moisture required if used regularly. Plantur 21 Nutri-Conditioner regenerates the hair structure and is the perfect complement to the Plantur 21 Nutri-Caffeine Shampoo. It can also be used as a hair treatment and should be left on the hair for 10 to 15 minutes. Relax with a book or cup of tea during the treatment. Make hair care during pregnancy a small feel-good break.